At the end of the eighties Denz discovered the music which controlled his life until now. The revolutionary music that was played in that time had a deep impact on him which made him realize what his mission was. To become a house pioneer. With his first bought records and cheap equipment he started practicing in his apartment together with a good friend also known as dj.stique. As many djs started their career, he performed in the beginning only at small friends parties until he got booked for the first time at club Lime Light in his hometown Oss. From this moment in 1993 everything started to become more professional and he could let people hear his dj skills every Friday and Saturday in this club were he became resident dj next to King Bee. Because of his successful performances, Denz got booked more and more to play across the Netherlands. 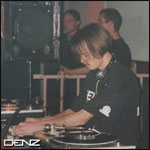 Clubs like Goldfinger, Broadway and Kadance were places Denz regularly performed in that time. The absolute highlight in that time was a gig in the south of France where they had a great show on a party with other fine European djs. Stique and Denz were playing together on 3 turntables which was quite unique for that period in time. This experience tasted that well, that they decided to continue performing this way and Global Grooves was born and they started there monthly event Incrowd in de Groene Engel in there hometown. They invited leading Dutch djs like Ronald Molendijk, Erick-E and Benny Rodriquez to make the Incrowd concept complete above the music of Denz and his friend.

At the end of the year 2004 Denz started the internet radio station Housestation.nl, were he and many guest djs performed weekly live on the world wide web. Because all local djs supported Housestation and performed once in a while on this online radio station, they got asked to host a area at the Gigadance festival, on where they had great success as housestation. The after party at dancecafe Stars, was for Danceclub Stars enough to see that housestation was more then able to organize more parties in this dancing, and Streaming Sessions was a fact ! There radioshows were from now on opened for public and from day one it was a big success! Artist like Darko Esser, Jan Liefhebber, Paul Hazendonk and many many more performed at this great Thursday evenings which were hosted by Denz and Rogier Zeebregts. The interaction between Denz and Rogier Zeebregts were that great that they spended more and more time together playing music, but also making plans to provide Housestation treu out the Netherlands.

With there party formula Incrowd they organized parties at Clubs like Poema Utrecht, Doornroosje Nijmegen as there hometown Oss as well. Today Housestation is differentiated from others because of there specific sounds and the way they are anticipate on each other. At parties such like Gigadance festival and Invite, Housestation is always called out as favorite. Denz who was born in the year 1969, is not planning to quit his career as dj for the next years. So keep your eyes opened for him and his child Housestation.nl to experience it all by yourself.